It is forecast that Walt Disney parks will experience a substantial increase in crowd levels over the next 5 years as we have seen a trend in rising International visitors and higher levels of loyalty from previous and future guests. The acquisition of Lucas Films and the Star Wars franchise has reinforced Disney as the number one vacation destination in the world.

The graph above displays that after several years of flat attendance, the growth trend has begun spurred on by improved domestic economics and unemployment rates. Customer demand is forecasted to increase exponentially year to year over the next 5 years. Consumer confidence in Disney and its offerings is also growing once again. Guest experience and reviews have gained a large boost from the recent addition of the RFID enabled Magic Bands. The improved reputation and experience will create a larger population of return guests particularly in the United States. The consumer satisfaction levels are shown below:

Unfortunately, Social data mining has confirmed the belief the new attractions at Universal Studios leveraging Harry Potter are drawing consumer attention. Social popularity for Disney has dropped as shown in the following display: 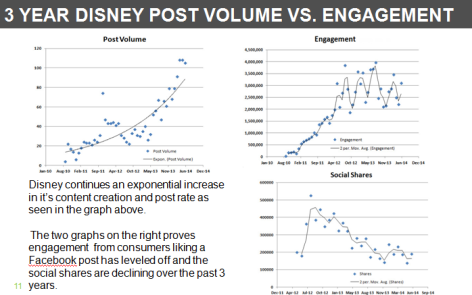 Currently, the parks are reaching capacity at an alarming rate and regularity. The guest experience will start to suffer if attendance continues to climb. Scenes as pictured below are becoming more common and is recommended that they are addressed.

It is recommended that current growth initiatives to expand the parks continue as originally planned. With 20% undeveloped Disney owned land in Orlando, Disney has the available resources to build large additions and expansions on park offerings increasing capacity, revenue and guest satisfaction. Utilizing the popularity of the Star Wars brand along with the upcoming films, Star Wars Land would make for a strong crowd draw in Hollywood Studios. This in turn would draw attention from the recent Harry Potter expansion in Universal Studios. In addition, the planned expansions of Animal Kingdom (Avatar based) and reimagining of Downtown Disney (Disney Springs) will also help Disney alleviate some of the crowd issues as well as generate new revenue and improve on the ability to compete with Universal Studios.

In addition, our top competitors, Universal Studios is planning an expansion of their own in an attempt to steal Disney market share. While early in their planning phases, locations and land acquisitions make their intentions quite apparent.

Currently the Walt Disney Company is the world known leader in the entertainment industry. However, demand is pushing its capacity to the limit making it more difficult to deliver the experience Walt himself had envisioned. This combined with continued aggressive growth and popularity of our competitors reassures that the Walt Disney Company needs to invest in expansion of its theme parks and venues. The company must position itself now for the push of our competitors if we are too continue revenue and market share growth.